Shetland Students Green Team encourage you to get involved in Da Voar Redd Up!

Da Voar Redd Up is the annual spring beach clean that takes place in Shetland. This year, Da Voar Redd Up will take place over the course of seven days, from 24-30th of April. Shetland Students Green Team are encouraging folk to get involved in cleaning the local beaches and have shared the below information.

All you have to do is choose a beach on the Marine Conservation Society Beachwatch site and pick up some bags to put your rubbish in from the Amenity Trust. More detailed instructions can be found on the Facebook event page.

As well as being corona-proof, another new element to Da Voar Redd Up this year is the opportunity to record what you find with a survey sheet. The Shetland Students Green Team had a go at this survey in 2019 at a beach found on the stretch of coastline between Port Arthur and Burwick. The beach is known as Flat Pund by the family that lives in Burwick, but is also known as Lang Hammer. 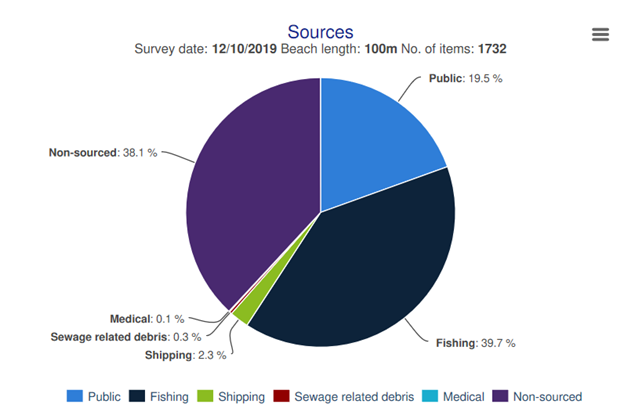 The pie chart shows that from a survey taking place on 12th October 2019 on a beach which is 100m long, there were 1732 items of beach litter found.

Based on the nature of the items you log in the survey sheet, the Beachwatch team makes a pie chart for you showing the various sources where the litter is estimated to come from. The ‘Public’ category includes crisp packets and plastic bottles and amounts to around one fifth of the items, while two fifths was sourced from ‘Fishing’ which also includes debris from aquaculture.

We also found some peculiar items, such as the circular object pictured below. An inscription on the side revealed that it was designed by a company in Skye called “Highland Aquaculture Ltd.”, which was active between 1988-2006. A report from March 1996 from Seafish details that this company was involved in research on designing equipment for collecting wild spat for scallop farming.

A picture from a Chinese manufacturer of lantern nets lets us visualize how the collector may have looked like, while some digging into the past revealed the manufacturer of this specimen was probably based in East Kilbride in South Lanarkshire, Scotland. And it has not reached the end of its life yet, it is now being used as a kitchen wall clock.

So we hope you find the chance to do some beach cleaning this year and discover some interesting finds! And if you are interested in joining the Shetland Students Green Team you can find us on Facebook or via e-mail (shetgreenteam@uhi.ac.uk).