Barrel jellyfish are solid with a thick, dome-shaped bell which can grow up to 1m in diameter. They have four pairs of large oral arms beneath its surface, hence their former name; Rhizostoma octopus. The sex is determined by a difference in colour of the gonads. Mature males have blue gonads, contrasting with the reddish-brown colour of the ripe female gonads. Barrel jellyfish commonly occur in large swarms in late summer, usually in deeper waters.

Habitat: Occurs in coastal waters. Can be found in deeper water offshore, especially during the winter months.

Distribution: Found in the southern and western shores of British Isles. Been recorded in the Outer Hebrides and the north west coast of Scotland. 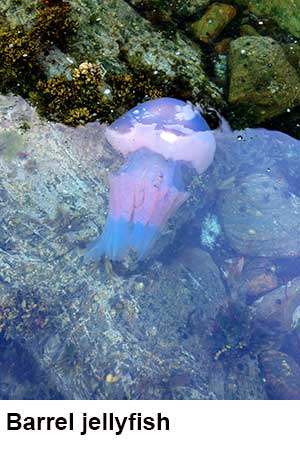 Pictures sent to the Marine Science and Technology department by Mark Fullerton.