Lumpsuckers are widely distributed around the British and Irish coast with their distribution extending further afield to North America in the west and northern Russia in the east.  Their preferred habitat is benthic to between 50 and 150 m depth on rocky bottoms.  Occasionally they have been found to 400 m and have also been found on floating seaweed.

Lumpsuckers spawn inshore during summer when water temperatures are around 8°C.  Females have up to 300,000 eggs, each egg measuring around 2.5 mm in diameter, and lay them in masses of up to 100,000 eggs which the males aggressively guard for six to seven weeks.  The newly hatched fish are 6 to 7 mm long and have been known to grow up to 61 cm (9.5 kg).

Distinguishing features include three distinct rows of bony tubercles (see picture) with no scales.  The ventral fins form a suction to help secure the fish to the substrate and the colour varies from bluish-grey, yellow-green, or yellow-brown.  During the breeding season, males change colour to blue dorsally and red or orange ventrally.

Lumpsuckers are valued for their eggs which are sold as a form of caviar.  The flesh (fresh or smoked) is eaten in Nordic countries with males being more highly sought after. 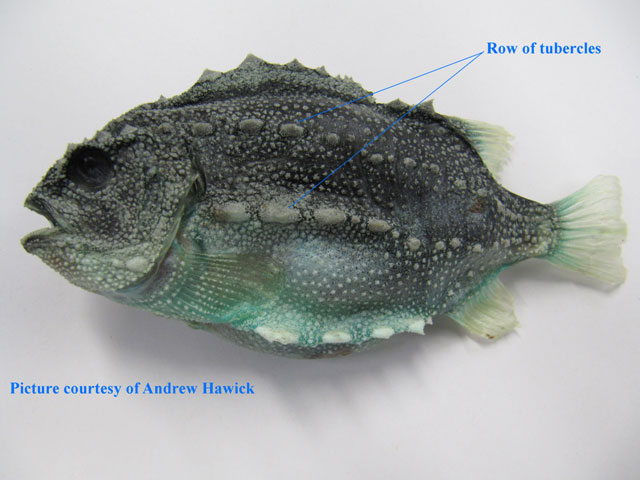 The lumpsucker was found aboard the north Everest Platform (about 100 miles east of Aberdeen) by Andrew Hawick.  The fish was found on the lower deck of the oil rig which is about 30 m above the water.  It measured about 12 cm long and around 5 cm deep.