The word porpoise is derived from the Latin 'porcus' meaning pig. The harbour porpoise (Phocoena phocoena) used to be referred to as the 'puffing pig' because of the sneeze-like puffing sound it sometimes makes when it breathes.

The species is common with a wide distribution from Iceland in the north to the southwest of England in the south and is the only species of porpoise found in European waters. They are born at a length of 67 to 90cm and can grow up to 1.8m long and have been reported to live up to 23 years of age, although few live past 12 years of age. This species rarely breaches the water and most people only catch a glimpse of their small dorsal fin. 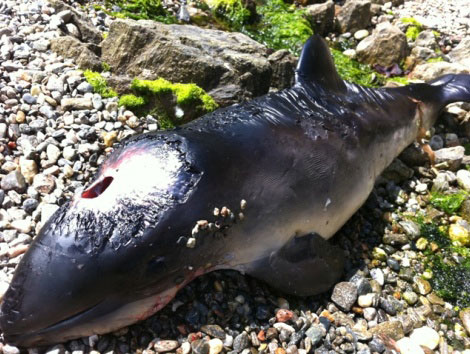 The specimen was about 75cm in length and thought to be a neonatal death, which is not uncommon in this species.  The porpoise was starting to decompose and is thought to have been on the beach for at least a day or two before being discovered.