This specimen of a rabbit fish was caught by the Shetland fishing boat Defiant (LK 371) while fishing north east of Shetland, and landed at the Lerwick fish market on 19th June 2018.

Rabbit fish are found in the eastern Atlantic Ocean and western Mediterranean Sea, from northern Norway and Iceland to Morocco. They generally inhabit the upper continental slope where they live close to the sea-bed in depths of between 300 and 500 metres, often in small groups. Some fish make summer migrations into shallower inshore waters (40 to 100 metres) which likely accounts for the location where this specimen was caught.

Rabbit fish are sluggish, slow-moving, and poor swimmers which move by flapping their pectoral fins (their 'arms'), rather than moving their tails which are long and tapering. The tail's resemblance to that of a rat means that the fish are sometimes also known as rat fish. There is a large spine at the front of their dorsal fin (behind the head) which is mildly venomous and can deliver a painful wound. Rabbit fish feed mainly on benthic (bottom-living) crustaceans and molluscs and their teeth are fused into hard plates to crush their preys' shells.

Like sharks and rays, rabbit fish are cartilaginous with no bony skeleton. They are distantly related to sharks but belong to a distinct group of fish called Chimaeras.

Rabbit fish are caught commercially in Scottish waters in small quantities, mainly in the deep waters to the west of Scotland, but are rarely caught around Shetland.

This specimen was caught by the Shetland whitefish trawler Defiant (LK 173) while fishing for whitefish with a demersal otter trawl to the north east of Shetland in ICES statistical rectangle 50E9 and was landed at the Lerwick fish market on 19th June 2018.

Thanks to the Defiant's crew and the Lerwick fish market staff for retaining the specimen. 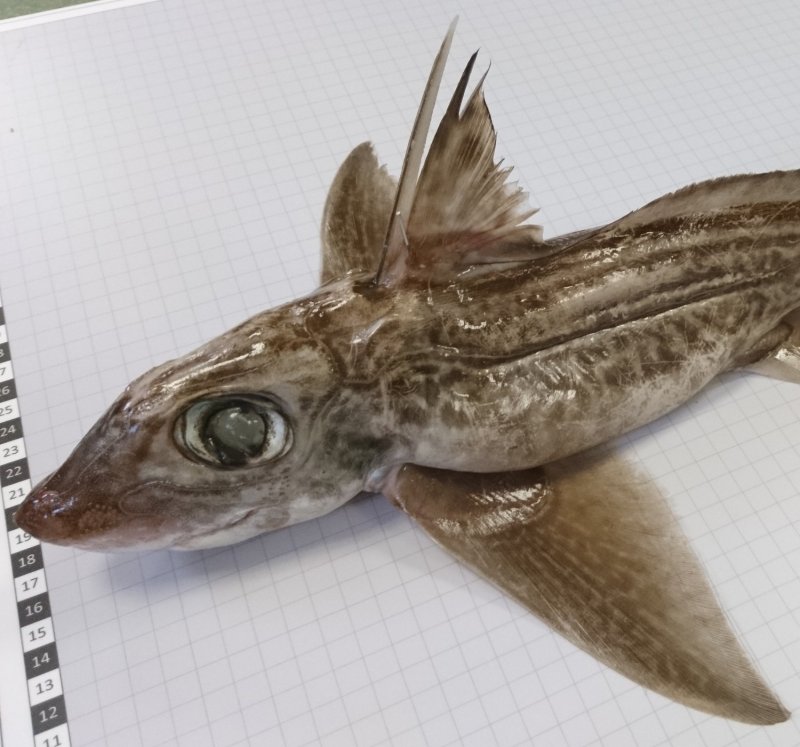 Rabbit fish: close up of head. Note the large eye, for vision in deep, dark water; the large spine in front of the dorsal fin, and the large pectoral (side) fins used for swimming.