Handed in to the Marine Science and Technology Department by the crew of MV Snolda on 07/06/2014.

The sea lemon is a member of the family, Discodorididae. It’s a very large, oval shaped slug with a frilly mantle close to the posterior end and distinctive warts (tubercles). Its mantle, which consists of eight or nine upright feathery gills, is quickly retracted when a disturbance is sensed.  A sea lemon can reach a maximum length of 12cm. It is also the most common and familiar sea slug on NW European shores. Its blotchy exterior can be highly variable, appearing in an array of colours including yellow, green, brown and pink.

Distribution: Common on British coasts, the Faeroes, Iceland, Norway, the Baltic Sea and many localities in the Mediterranean Sea. 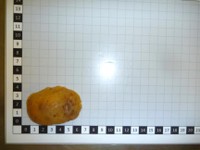 Sea Lemon handed in by the crew of MV Snolda.