Tope are a small, fast-swimming shark native to UK waters. They live close to the bottom in depths down to 200 m and are known to feed on small fish and flatfish, and have also been reported to hunt in packs when mackerel are abundant.  Females grow much larger (2 m) than males, reach maturity at around 125 cm and give birth to 20-40 pups in the summer, usually in inshore waters.  They are distributed through the Eastern Atlantic, between the north of Norway and South Africa, along much of the South American coastline, much of the west coast of the US and in waters along the south of Australia and around New Zealand.

Identifying features include: the base of the second dorsal fin much shorter than the base of the first dorsal; eyes with a nicitating membrane at the front of the lower eyelid and sharp triangular teeth with a serrated hind side. 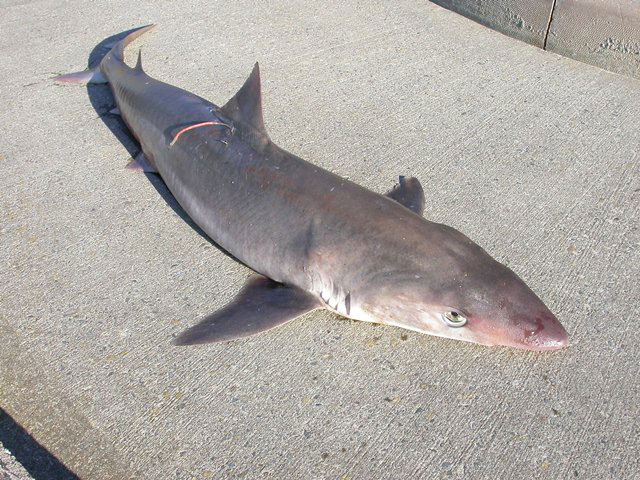 The tagged tope that was recaptured was landed by the Arcturus LK59 in October 2007. The tope was a female, weighed 12.32kg and measured 1.4m. The UK Shark Tagging Co-ordinator at the University of Southampton revealed that this tope was initially tagged and released at Mid-Cardigan Bay (Wales) on the 14th June 2003 when it weighed just 15lb (6.8kg). This shows that it may have swum more than 950km (590 miles) to where it was caught, 12 miles NE Lamba Ness, Unst (approx. 60° 56’N 0° 26’W).

Further information on the UK Shark Tagging Programme can be found at www.ukshark.co.uk